Favourite features so far in Tableau 10.5

Unfortunately I was unable to attend TC17 but I watched the recording of developers on stage at this week and got excited about all the great features coming soon to Tableau! You can register to listen back to a lot of the content from the conference here. It’s great to see the employees who are developing and creating the latest features standing up on stage and passionately telling the community about what they’re getting up to. People in the community were tweeting about the cool new enhancements available to test on 10.5 so I needed to have a look for myself. I downloaded the beta version of Tableau 10.5 and so far, these two are my favourites!

I absolutely love this feature. It was demoed by Shahaf Nuriel during the devs on stage keynote. Her presentation revealed lots of nice developments that are in the pipeline. She was interviewed by the Tableau Wannabe podcasters Emily Kund and Matt Francis. Viz in Tooltips does exactly what it says on the tin! Tooltips are currently what you see when you hover over marks or elements in a view in Tableau. You can add extra detail that you don’t need to see at first glance. I tend to want to see a lot of detail and I’m often tempted to pack as much as possible onto the face of a dashboard. As soon as one question is answered, I have another. To date, I’ve often used action filters and hierarchies as a way of providing ‘detail on demand’. Viz in Tooltips is great for just that. You get to save prime real estate on the face of your dashboard, while getting your questions answered in a visual way when you hover over the marks. It’s a great way of providing supplementary detail in a really clean way.

I created the dashboard below using the dummy data set Superstore that we all know and love. I made up some budget figures for 2017 so that I could show budget variance analysis for the year. When looking at financial data, people often want to keep the specifics i.e. they want to see the figures. With this new feature, we can show the visual representation on the face of the dashboard, and show the table or cross-tab when you hover. Looking at the ‘Budget Variance’ bar chart below, you quickly see which countries were under budget. When you hover over the United Kingdom you can see which sub-categories were under budget and get the break-down. You can use the tooltip to answer more detailed questions depending on what you’re interested in. 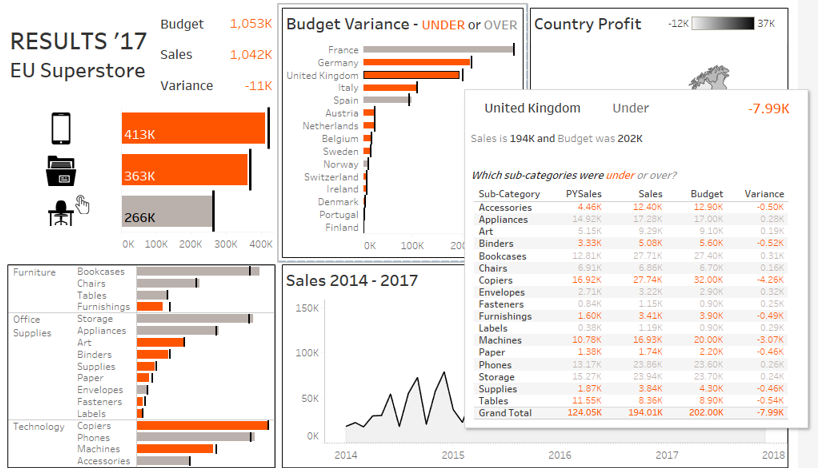 On the same dashboard, I’ve also used this feature to add historic data to provide context. In the map of Europe in the top right-hand corner, you can see that there is loss reported for Ireland. You might then wonder what it was in prior years and what the trend has been. When you hover over the country, the Tooltip shows the profits since 2014 so you can see the downward trend. You obviously need to dig further into the detail to look at why there is a negative profit. In this scenario you might add an option to click to another sheet to explore in more detail and investigate the possible reasons. 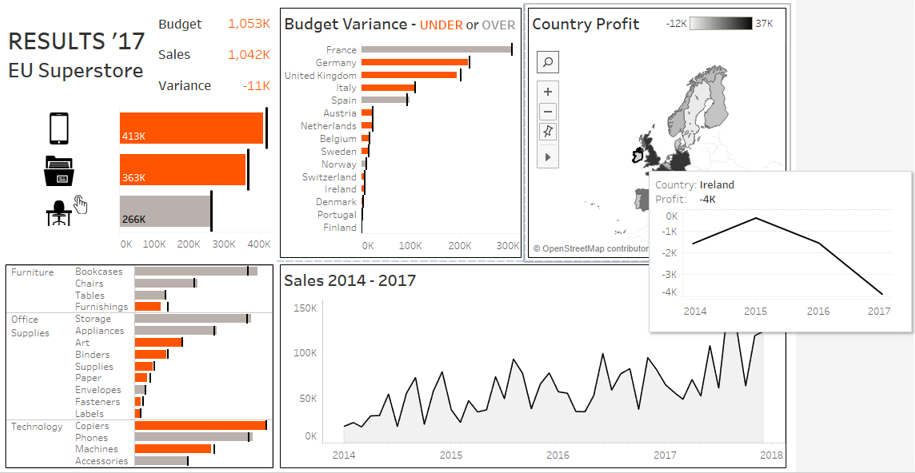 My tendency is to want to hover over the viz in the Tooltip to see even more information. This could ultimately result in a never-ending process of Tooltips within Tooltips so I guess it has to end somewhere! I believe interactivity in Tooltips is on the road-map though, so that’s something to look forward to. For now, this will really enhance the user experience and allow us to answer lots of questions, while staying in the flow and keeping the dashboard nice and clean. A definite win!

In the 10.5 beta you can now save to older versions of Tableau Desktop by clicking on ‘File’ and then ‘Export As Version’ as we can see below: 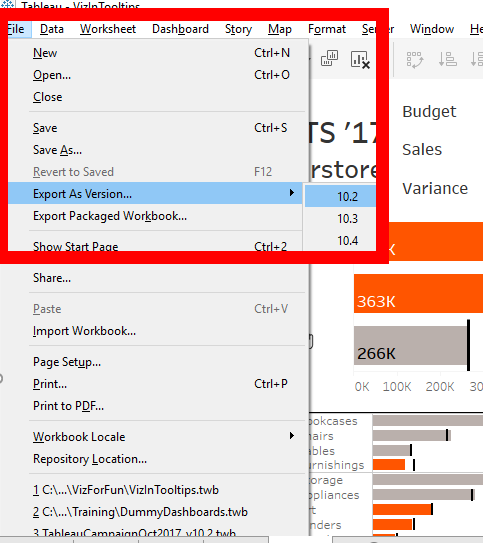 What I like about this is that you don’t need to worry as much about what version you’re in, as you can save back as far as version 10.2. So all you early adopters can upgrade to get the latest treats and still be able to export to your colleagues who are living in the past! Granted, they won’t get the new shiny features but it is much easier if you can work away in one version. I’ve exported the dashboard above as version 10.4 and saved it on Tableau Public here.

I’m also looking forward to seeing the impact of Hyper which looked impressive in the demo. Anything that will enhance performance and speed is welcomed when it comes to those workbooks and data-sets that aren’t as responsive as you’d like.

That’s it from me for now, thanks for reading.

About the Author: Louise Shorten

This site uses Akismet to reduce spam. Learn how your comment data is processed.